Diopsys NOVA VEP/pERG are painless, non-invasive vision tests that
objectively (do not require a verbal response from a patient) to measure
either the function of the whole visual system from your eyes to the back
of the brain (VEP) or of the retina, the light sensitive layer of the eye
which changes light signals into electrical signals for transmission. The
use of VEPs and ERGs has been demonstrated to aid in the diagnosis and
treatment of a variety of visual disorders. In glaucoma these two
electrophysiological tests have been recently shown to be the earliest
marker for early glaucoma, before any nerve damage; in diabetes abnormal ERGs have been associated with early ischemia before visual presentation in the retina such as bleeding (hemorrhage) or exudation. In amblyopia VEPs
allow for: early detection in non-verbal children; an objective method of
monitoring. 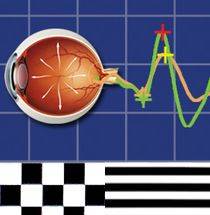 VEP measures the electrical activity of the whole visual system. When
light from an object viewed enters our eyes, it is converted into an
electric signal by the retina. That signal travels through the optic nerve
(the wire that connects the eye to the brain) back to the occipital cortex
(the portion of the brain in the back of the head which is directly
responsible for vision). The VEP measures the strength of the signal
(amplitude) reaching the visual cortex and how long it takes to get there. How The Test is Performed One of our trained technicians will properly position three sensory on the head. There is no pain associated with the test. The
patient then looks at a series of black and white patterns that appear of “flip” or alternate rapidly on a computer screen. While looking at the checkerboard pattern for 10-60 seconds the instrument records the signal from the back
of the head. The entire process takes between 5-30 minutes depending on the testing performed. Usually, we will patch each eye and record visual response of each eye independently. 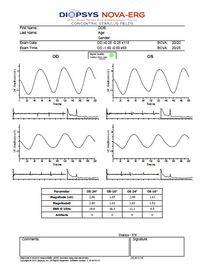 pERG is a painless, non-invasive test that measures objectively the function of
the retina. Thus, it can be used by itself for known retinal disease or in
conjunction with a VER to identify the independent components of visual
loss from the retina vs. the entire visual system. Early, subtle decreases
in either the amplitude of the signal (strength) or latency are markers for
early glaucoma, ischemic damage to the retina in vascular diseases such as
diabetes, macular degeneration, etc. The pERG measures the electrical
activity of the retinal cells, which send the signal through the optic
nerve and eventually to the brain. In summary, the pERG tells us how well
the retina is in sending back the electrical signal created by it. Thus
pERG are beneficial in making early diagnosis, objectively looking a change
in functioning, and monitoring the effects of treatment. The pERG is performed similarly to the VEP, with the following differences: the
electrodes are different, they are placed in a different location, and the
targets are slightly different.